President Clinton’s sexual misconduct was morally wrong. He violated his marriage vows. It was also, ethically, and legally wrong for him to lie to Congress. The House of Representatives and the Senate were right in exercising their constitutional responsibility to hold President Clinton accountable for his moral failures.

The three R’s of restoration are:

Fess-up and identify and change the wrong thinking and behavior that led to your mess.

Seek forgiveness from God and the affected parties, if possible. Forgive yourself. Permit yourself a fresh start.

Make restitution for the consequence of your sin. If that is not possible, find a way to “pay-it-forward” in an appropriate way.

After his Impeachment and acquittal, President Clinton did just that.

President Clinton said this in his press briefing at the White House following his acquittal by the Senate in 1999 following Impeachment on charges of perjury and obstruction of justice.

President Clinton determined to better himself by establishing an accountability counsel.

“President Clinton last month asked three pastors to meet weekly with him in the wake of his admission of a sexual relationship with former White House intern Monica Lewinsky.”

Gordon MacDonald is a graduate of the seminary from which I graduated. Denver Conservative Baptist Theological Seminary was its name when I attended. Today it is known as Denver Seminary. During my tenure at seminary, Pastor MacDonald would often visit and speak in chapel and be a guest lecturer. Aspiring Pastors looked to him as a role model. MacDonald was named Chancellor of Denver Seminary in 2011 and retired in 2019. He had served as interim President of Denver Seminary from 2008 through 2009.

In 1987 MacDonald humbled himself, publicly confessed his sin of adultery, and stepped on the path of restoration. A group of elders from his church intervened in his life. They imposed a period of silence – nearly a year of isolation from the public eye – and a series of other measures designed to heal MacDonald’s spirit. MacDonald then wrote a book about his journey to restoration. His book, “Rebuilding Your Broken World,” prescribed a course of reflection, confession, and change that required time, discipline, and, perhaps most important, a separation from daily duties. President Clinton commented that he had read the book twice. 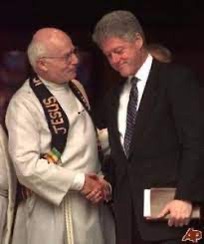 J. Philip Wogaman was the Senior Minister at Foundry United Methodist Church in Washington, D.C. He was President Clinton’s Pastor during Clinton’s tenure as President.

Appropriately, these men honored the confidentiality of their meetings with President Clinton. While we may not know the details of their meetings, I am impressed with Clinton’s decision to submit himself to these counselors.

I also admired Hillary, who, like Gordon MacDonald’s wife Gail, stayed faithful to her marriage vows and remained married to her husband.

President Clinton also gave himself and the country permission for a new start when he said,

“I am also humbled and very grateful for the support and the prayers I have received from millions of Americans over this past year. Now I ask all Americans, and I hope all Americans, here in Washington and throughout our land, will re-dedicate ourselves to the work of serving our nation and building our future together. This can be, and this must be, a time of reconciliation and renewal for America,

I credit Clinton with seeking restitution by paying it forward in establishing the Clinton Foundation after his term of office.

“Building on a lifetime of public service, President Clinton established the Clinton Foundation on the simple belief that everyone deserves a chance to succeed, everyone has a responsibility to act, and we all do better when we work together.”

“President Clinton established his post-presidential office in the iconic neighborhood of Harlem in New York City, where he saw a great opportunity for his Foundation to help empower local small business owners.”

Establishing his office in Harlem was of particular note to me. Joanne and I had visited Harlem. We have many great memories of our time there. We were privileged to attend an anniversary celebration at Bethel Gospel Assembly.

The leader of the Bethel Gospel Assembly worship dance team hosted us in her Harlem apartment. Her apartment was located a few blocks from Central Park. She had danced on Broadway in the past. We took her to see The Phantom of the Opera. After the play, she tried to hail a cab to take us back to her apartment. No taxi would stop. Finally, she said I had better hail a cab. As soon as this white man hailed a cab, one pulled over to the curb. The driver did not look too happy when I announced our Harlem destination. I guess we still have a ways to go toward our nation’s “All men are created equal.” ideal.

Since our ministry was developing an international perspective, I also took special note of The Clinton Global Initiative and the work that was being done internationally by the Clinton Foundation. The inititative provided insights on some of the challenges faced by countries that we would be visiting.